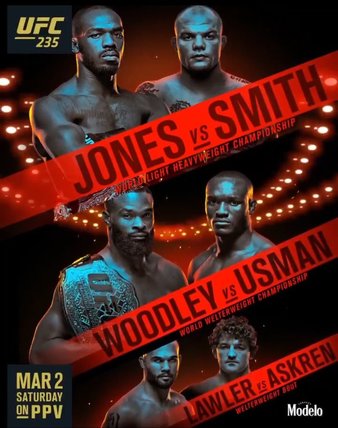 The UFC is heading back to Las Vegas for the UFC 235 PPV card this weekend. The card is stacked from top to bottom with two title fights (Jones vs Smith, and Woodley vs Usman) at the top of the card, as well as a lot of other big names fighters including Ben Askren vs Robbie Lawler, Cody Garbrandt, Zabit Magomedsharipov, Johnny Walker, Misha Cirkunov and more.

Jon Jones is a massive favorite in his fight with Anthony Smith for a reason. Jones looked in peak form in his recent win over Alexander Gustafsson, and there’s every reason to believe he’s at his best at 31 years of age and with some controversy hopefully behind him.

Add in the fact that Anthony Smith is probably one of the least proven guys to get a UFC title fight and you can see why the odds are so wide in this fight. Smith moved up to light heavyweight and won 3 straight fights via finish including big wins over Shogun Rua and Volkan Oezdemir in his last two outings, but this is a gigantic step up.

I don’t think Smith is going to be able to close the distance against Jones, who should be able to use his reach to pick apart Smith at range. It could either be a dominant 5 round performance, or a finish if Jones decides to open up a bit and look for a knockout or submission.

This is an interesting fight between two great wrestlers, but I think the advantage is with Woodley for his fight IQ and explosive power punching ability. Woodley has proven himself to be a smart and safe fighter against guys who are top level at one specific discipline.

He beat (well really just didn’t lose) against Wonderboy who is a top level striker in the UFC, and then easily beat Demian Maia the jiu jitsu specialist. Darren Till never deserved a shot, and now he faces Kamaru Usman who is a wrestler with high output.

On paper, Usman’s style could be the one that gives Woodley issues, but I just don’t think his striking is at a level that will really concern Woodley, which will leave openings for Woodley to use his explosiveness to either get a takedown of his own, or more likely land a big fight ending strike.

Ben Askren makes his UFC debut against Robbie Lawler, which on paper is a fairly tough step up in competition for Askren. All the pundits say that Lawler has amazing takedown defense, which is true for the most part, but it hasn’t stopped him from being taken down often against top level wrestlers such as Johnny Hendricks, who secured 7 takedowns in his two fights with Robbie.

I think Askren will be able to get this fight to the mat, and from there he should be able to do work. Even if he doesn’t finish Lawler, I expect his non-stop aggression looking for a takedown to win at least 2 of the 3 rounds.

Look for Askren to get this big win and set up another big fight at the top of the welterweight division.

Torres is 6-3 in the UFC, but her only losses have come against Rose Namajunas, Joanna Jedrzejczyk and Jessica Andrade, who are the top 3 fighters in the women’s strawweight division.

Torres now takes on Weili Zhang, who is a hyped up prospect who has impressed in her 2-0 UFC career.

This should be a tightly contested striking match, and I expect Torres to use her veteran saavy to get the nod in a close decision, potentially a split decision win.

Garbrandt returns to 3 round fights against Pedro Munhoz, after three straight title fights, including two knockout losses to TJ Dillashaw. I thought Garbrandt was awfully overrated after his win over Dominick Cruz. Everyone talks like Garbrandt destroyed Cruz in that fight, but in reality he really didn’t land much offense of his own outside of his knockdown in round 4. He was mostly dancing around and doing a great job of avoiding Cruz’s offense, but to me avoiding a fight shouldn’t be praised. He won that fight 3 rounds to 2, but was outstruck 88-68 in significant strikes in the process. A far cry from the “dominant” performance that it has gone down as. Cody followed up that win with 2 straight KO losses to Dillashaw, which showed his chin is definitely suspect, and will be a problem his entire career.

Munhoz has gone 6-1 in his last 7 UFC fights, including 3 submission wins and a knockout of Bryan Caraway among those wins.

Munhoz has good output, and although I don’t expect him to get this fight to the mat, I think he could win this fight by being the more active fighter. If he does get the fight on the mat he will be the superior grappler to Munhoz as well.