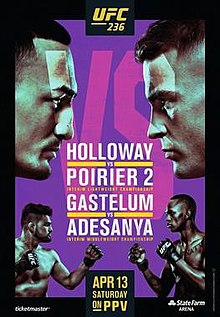 The UFC is heading to Atlanta for UFC 236, which will be headlined by not 1, but 2 interim title fights. Max Holloway and Dustin Poirier will battle for the interim lightweight belt and maybe a shot at Khabib, while Gastelum and Adesanya will fight for the middleweight interim belt and a shot at Robert Whittaker.

This is a great fight for an interim belt at lightweight. Holloway is moving up from featherweight for this opportunity and he comes in as a pretty big 2-1 favorite. Holloway hasn’t lost since losing a decision to Conor McGregor way back in 2013 when he was just 21 years old. He’s since strung together 13 straight wins and has fought the best of the best at featherweight for about 8 straight fights.

Poirier was another featherweight that lost to McGregor back in 2014. He moved up to lightweight after that loss and he’s gone 8-1-1 in the UFC since making that move, with big finishes over Anthony Pettis, Justin Gaethje and Eddie Alvarez in his last 3 fights.

I like Poirier in this fight. I think he will be able to handle the pressure of Holloway, while getting in his own shots on the feet. Poirier is a very technical striker in his own right and his additional power can end the fight at any time. Holloway generally overwhelms his opponents en route to a TKO, but I just don’t think that strategy will work against Poirier. Dustin has been in deep water plenty of times in his UFC career and has managed to come out on top. He will have to do that once again in this fight, but I think he has the ability to weather the storm and land his own shot.

At these odds, I think the smart money is on Poirier.

The co-main is another interim title fight with the winner getting a shot at Robert Whittaker when he gets healthy. Gastelum was supposed to fight Whittaker at UFC 234, but an abdominal hernia forced Whittaker out of that fight. Adesanya won a decision over Anderson Silva on the same card, which set up this fight.

I like Gastelum at plus odds in this fight. I think his boxing is still underrated and I expect him to be able to close the distance and land some big shots on Adesanya. I also think Gastelum has more paths to victory, with the potential to take Adesanya’s back and work for a rear-naked choke a definite possibility. Gastelum has 5 rear-naked choke wins in his MMA career (including TUF) and we really haven’t seen Adesanya have to defend much grappling in his career. Brunson tried takedowns, but they were extremely telegraphed and I think Gastelum will focus on striking and only go for the takedowns if they are there, which should help him potentially get this fight to the mat or take Adesanya’s back off the cage.

Adesanya is a terrific striker, but he’s still somewhat untested against top level fighters in his UFC career. He’s been taken down 6 times in 5 UFC fights and although he’s been able to get back to his feet fairly easily, against an all-around fighter like Gastelum that might prove more difficult.

I’m going to side with the more proven and often underestimated fighter in Kelvin Gastelum in this fight.

These guys are likely going to slug it out in the middle of the cage until one of them falls down. Rountree doesn’t have much of a ground game, but I don’t expect Anders to take advantage of this, so I’m going to side with the pure knockout power of Khalil Rountree.

Rountree is 3-4 in his UFC career with all 3 wins coming by first round knockout. He does have some cardio issues, but I think Anders is hittable, and I don’t think anyone’s chin can handle the power that Rountree throws with.

Jouban is a very solid fighter. I would put him in the top 20 in the welterweight division. He just ran into two finishers in Gunnar Nelson and Niko Price in his two fight losing skid in 2017. He bounced back with a knockout win over Ben Saunders a year ago and will now look to get back to trying to crack the top 15, which he was about to after his 3 fight winning streak over O’Really, Muhammad and Perry in 2016.

Dwight Grant is a good fighter, but this is a big step up in competition for him, so I’m happy to take the proven veteran in this pick’em fight.

Saint Preux is the type of guy that isn’t going to lose to low level opposition. He loses fights when he steps up in competition, but I don’t think he’s going to get caught by a big knockout or submission at the hands of Krylov.

This is another pick’em fight where I’m taking the veteran who is used to facing high level opposition.