The UFC is heading back to Vegas for the finals PPV event of the year. UFC 245 is stacked with 3 title fights and several other big names. 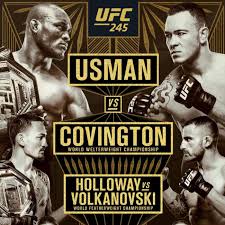 Usman vs Covington is an interesting battle between two very similar fighters. At these odds though there is definite value on Covington. He’s arguably the better wrestler with better conditioning, so as long as he can deal with Usman’s strength I think Covington can push the pace even more than Usman normally does and win this fight on the judges scorecards.

I really think this fight could go either way because we don’t know just how good either guy is, but we will find out because they are very similar fighters. Whoever is the better MMA wrestler will win this fight.

This is my toughest pick on the main card. That said, I have to side with Max Holloway. He has the volume and movement to keep Volkanovski on his back foot. That said, Volkanovski is really the first guy who I think really has a legitimate chance to dethrone the featherweight champ.

Let’s call this one a lean on Holloway, but I won’t be betting it myself.

Nunes and De Randamie may be a wash on the feet, but Nunes is far better on the mat, and she also has the title fight experience that should allow her to prevail wherever she takes this fight. I expect this fight to be tight and for Nunes to potentially win on points or a late TKO.

I think people are bashing Aldo way too much for this drop to bantamweight. Sure he looks skinny, but I think he will make weight easily and show up with a vintage performance vs Moraes. Let’s not forget that Aldo only has losses to the two guys competing in the featherweight title fight on this card and Conor McGregor in his prime. He’s still an elite fighter and I expect him to get this win over Moraes.

Marlon will need to get an early knockout (which he’s capable of) or else Aldo will take over this fight in the second and third rounds.

Faber was able to connect with his big overhand right to knockout Ricky Simon in his comeback fight back in July. He won’t land that shot again. Yan is another step up from Simon and he should be able to tune Faber up on the feet and easily win this one, while making Faber look old.